Are people voting less than they used to on Physics SE?

It seems to me that the level of voting on Physics SE is noticeably lower than on most other SE sites that I frequent and lower that it has been in the past (I have been a user on the site for several years). A casual look down the list of most recent questions shows that the vast majority are on only 0 or 1 vote. I remember a time when a question would get 1 or 2 up-votes, simply if it was constructive, valid and well-presented. In fact, I get the impression that, these days, the voting system is being used almost exclusively as a tool to 'punish' questions that are deemed unworthy.

If people aren't using the voting system, there are two potential issues I can see: firstly, there is a lack of reward/incentive for people to stick around and spend their time answering questions. Secondly, it will lead to a lack of differentiation between good/bad questions and answers - the good will get lost amidst the bad/mediocre.

So, what has happened with the voting? If people aren't using it, then it may as well not be there ...

These statistics are included in the site analytics page (25k+ rep). There is generally a lull in posting rates in the summer and over the winter holidays, but the trend on the votes is less marked. Here are the (weekly-averaged) post and vote rates over the past three years: 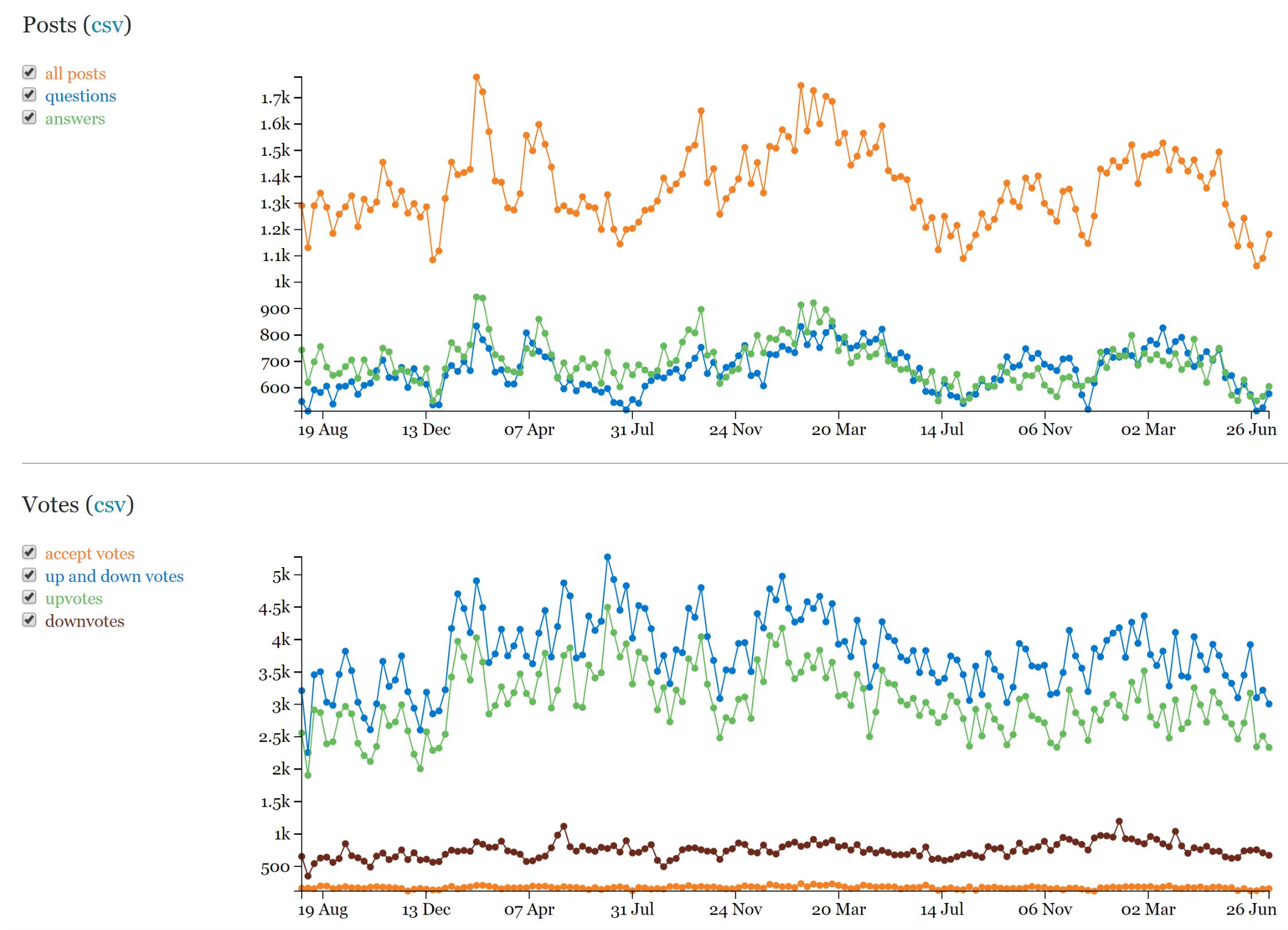 The data before 2015 do show a year-on-year increase, which has since stabilized. I normally don't set much stock on data taken roughly between June and August, as the summer does tend to see much lower traffic (and indeed the traffic tends to show stronger seasonal variations, but a recent data outage hasn't been fully recovered), but the mid-semester high point in voting last March does seem to be below the high-water marks from 2017 and 2018.

I'm not sure whether this is enough evidence to be concerned about, but it isn't conclusive evidence that everything is all right, either.

(If people want to play around with the data, it is easily available from the Data Explorer - here is a query to get you started, though it's probably easiest to analyze offline.)

Not the answer you're looking for? Browse other questions tagged discussion voting .

-5
Physics' updated site theme is live for everyone

1
Should we have badges supporting consistently good answerers/askers?
13
Is it part of this site's charter to dispel ignorance and raise awareness of science?
13
Do we want and need a set of canonical questions with canonical answers?
67
The secret to getting a massive reputation is ___
2
The secret to getting rewarded for high-quality answers is ___
3
Should we explicitly tell people that enumerated lists of questions are usually a bad idea?