Banes and Boons of "extra" Bounties

In the past few weeks I have seen users placing "extra" bounties on questions with answers that are "exemplary and worthy of an additional bounty." While the said answers undoubtedly make some of the higher-quality posts that I have seen on SE, to my understanding these "extra" bounties work against its intention of motivating answerers by placing emphasis on the bounty itself, as opposed to any intrinsic motivation.

Essentially, I am concerned that prolonged use of the bounty system in this way will overjustify the creation of "exemplary" answers and eventually degrade the quality of the site in one of two ways (or both): The answerer, in attempt to get reputation/recognition, is verbose at best OR the bounty system loses its appeal as users find there is nothing to answer.

In moderation is it proper usage of the system?

My favorite use-case for "Reward an existing answer" bounties is late answers that are substantially better than existing ones.

Example from on-site: Why has Earth's core not become solid?.

There is nothing at all wrong with the accepted answer by Kyle K. More than that, it's a good answer. However, more than a year later David Hammen added an outstanding answer which has languished in relative obscurity despite my posting links to it here and there around the site.

I want more people to take the effort to upgrade the response to old questions, and one way to encourage that is by rewarding the behavior.

A similar example from Stack Overflow is this answer by CR Drost. That question has pre-existing good answers, but Mr. Drost came along much later and did a better job explaining the "Why?" than the existing answer and I would like to reward that.

This is proper usage of the system, and there is even a bounty reason to reflect that.

See also this mother meta answer about bounties which states:

"Can I award a bounty to an old answer?

Yes, you can award your bounty to any answer on the question. This makes it possible for users to reward particularly good answers with more rep than a standard upvote would provide.

Keep in mind, that the bounty can be awarded only after a minimum of 24 hours, after starting the bounty. It is suggested that you wait until the grace period to award the bounty, as due to the additional attention a bounty gives, the answer may receive more upvotes."

As others have mentioned, bounties that reward existing answers are explicitly encouraged by the design, and bounties have had that explicit encouragement designed into them since the bounty system reached its final shape in late 2011.

The use of such bounties has been in place in this site for the past seven years or so: you can find all of those bounties in this Data Explorer query, which can also be used (as in this query) to find the rate at which they've been posted. Graphically, it looks like this: 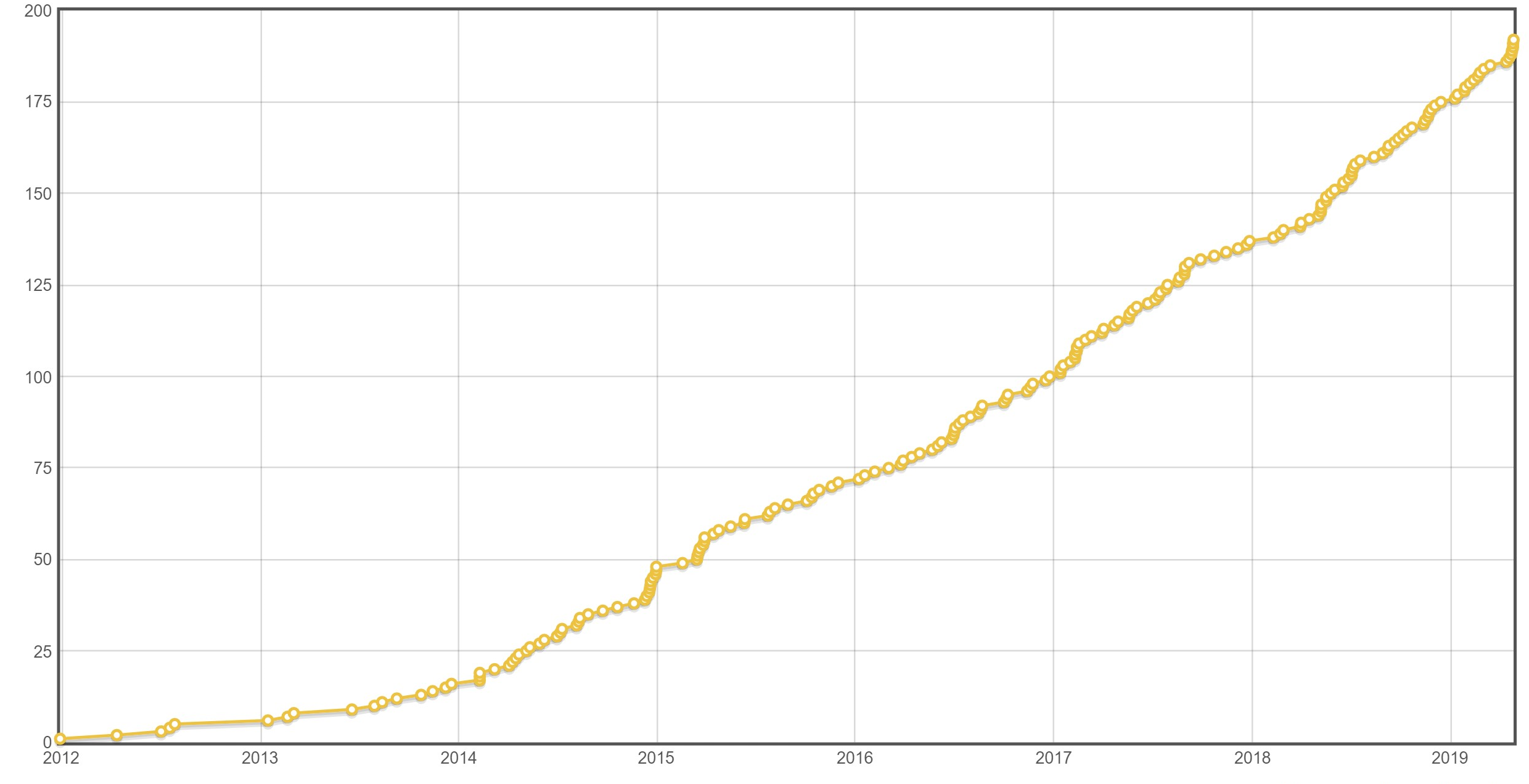 (Date on the horizontal axis, accumulated number of 'reward existing answer' bounties on the vertical axis.) There is a minor bump in the rate over the past ~month or so, but it does not represent a break with the long-term trend, and it is not the largest localized burst in the rate historically.

This represents, at current SEDE count, 192 out of a total of 2920 bounties (full listing here, rate graph here). (Also, for full disclosure, about a quarter of those 192 were set by me; as I've argued previously, we need more of those bounties (and bounties overall), not less.)

Essentially, I am concerned that prolonged use of the bounty system in this way will overjustify the creation of "exemplary" answers

How exactly is promoting quality content a problem, again?

and eventually degrade the quality of the site in one of two ways (or both): The answerer, in attempt to get reputation/recognition, is verbose at best

If you think this is a problem, show it. Show evidence of answerers being "verbose at best", to the detriment of the content, in an attempt to fish for post-answer bounty rewards. (Which, frankly, as a strategy, makes no sense at all. The answers being rewarded are not being prized for being verbose, but for being high-quality.)

OR the bounty system loses its appeal as users find there is nothing to answer.

From the 192 'reward existing answer' bounties listed in the query above, a full 53 of them (i.e. 25%) attracted an additional total of 70 answers while the bounty was running. Given that these were questions that already had quality answers, this seems like it's still working to increase contact between answerers and interesting questions (which have a high correlation with the exemplary answers), thus producing more quality answers.

If you think this is a problem, then show it.

I will address the concerns pointed out in the second paragraph of v1 of the question:

1
Why won't you spend your reputation (on bounties)?

8
Is the time scale for bounties too short on stack exchange?
4
Do I have to award the bounty even if the answer does not deserve it and is downvoted?
25
Flagging low quality answers: an experiment
17
T̶h̶i̶s̶ ̶q̶u̶e̶s̶t̶i̶o̶n̶ ̶s̶e̶e̶m̶s̶ ̶l̶i̶k̶e̶ ̶a̶ ̶l̶i̶s̶t̶ ̶q̶u̶e̶s̶t̶i̶o̶n̶