Can we consider MR Imaging questions as on-topic unless they ask for specific engineering solutions?

Context: This question on basic principles of image formation in medical MRI was asked in May 2014, received an accepted answer at the time, and was left unchallenged until August 2019, at which point I decided to attempt to summarize in some detail the topic in an answer that was well received. Soon after, another (greatly underappreciated) answer by @Farcher appeared. In the meantime the original question (as well as the accepted answer) went through quite an upsurge of upvotes.

Despite this positive response in general, a decision was made to close the question as off-topic because it was considered to belong in engineering. I did accept that as part of the rules of the game after getting a response to a flag prompting me to bring up the issue in Meta.

At that time I opted not to write a question in Meta because it was bound to be received as self-serving. However, the question has been now reopened, so it may be a good time to bring this point up as an abstract, productive discussion.

The question is self-explanatory, and what follows are my arguments to consider a more flexible embrace to questions and answers on MRI topics, as well as other engineering physics subjects.

My first exhibit is the fact that there are many books that in one way or another (either in the title or in the preface) are presented as MRI "physics" even though they focus their contents on exactly the concepts in the post referenced above: 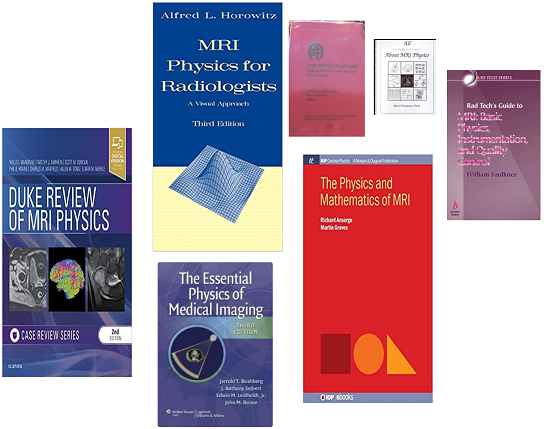 Second (and in no particular order of importance), I see that the Physics Forum has a similar post, which gathered quite a bit of activity: 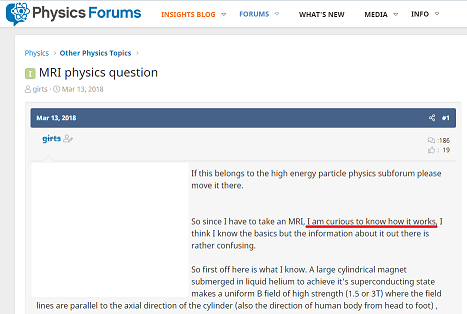 In fact, there are even more purely engineering type of questions in the same forum, such as this one asking why applying gradients to a superconducting magnet is going to produce audible noise, and this other one strictly engineering question on sequence design.

Along the same lines, a search for MRI on the American Physical Society does yield background MRI topics of interest: 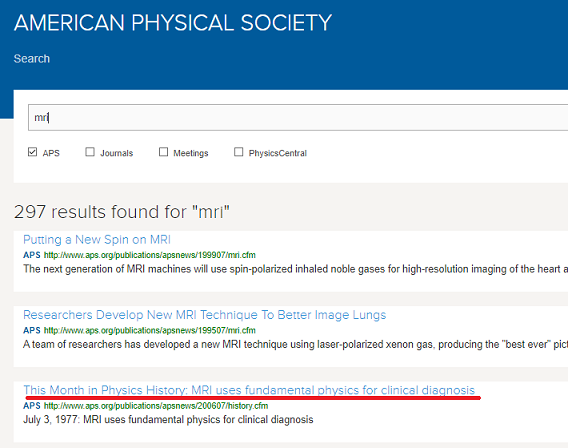 Finally, I would point out that we have appropriate tags for these types of questions:

I'm generally a big supporter of engineering questions when they are about the underlying physics. This one is a bit of a unique case though. There were 2 votes to close as "too broad," and two votes to close as "engineering." I could have been swayed either way and I distinctly remember thinking "Well, if I'm wrong on it being engineering, I would still vote to close as too broad anyway, so the effect is the same."

It's worth recognizing that our "too broad" definition is used for things that could have an entire book written about them. As it turns out, your post here included covers of books written to explain that question. So it wouldn't be out of line to say it is too broad in its current form. If it had asked about particular components of the process, it wouldn't be nearly as broad and would be entirely on topic (in my opinion).

Of course, the question was answered and so somebody could say "It can't be too broad if answers were written!" But, I evaluate questions on the question alone. Whether answers exist or not doesn't matter. A great answer can't save an off-topic question.

So to answer the main question, I don't think that, in general, MRI questions are off-topic. But, this particular question had a few things going on that make it not as clear, and not about MRI per se. That said, the community reopened it, so the process worked as designed!

As a side note, I want to point out that just because we have tags for something, doesn't mean it is on-topic. Tags are used to categorize, not define whether it is on-topic.

I think the basic issue here is that (as Lewis Carroll remarked) "the thing" and "the name of the thing" are two things, not one.

The thing named "Medical Physics" is in reality a branch of engineering: the mission statement of the European Federation of Medical Physicists (quoted from Wikipedia) is:

Medical Physicists will contribute to maintaining and improving the quality, safety and cost-effectiveness of healthcare services through patient-oriented activities requiring expert action, involvement or advice regarding the specification, selection, acceptance testing, commissioning, quality assurance/control and optimised clinical use of medical devices and regarding patient risks and protection from associated physical agents (e.g., x-rays, electromagnetic fields, laser light, radionuclides) including the prevention of unintended or accidental exposures; all activities will be based on current best evidence or own scientific research when the available evidence is not sufficient. The scope includes risks to volunteers in biomedical research, carers and comforters. The scope often includes risks to workers and public particularly when these impact patient risk.

In any other field, "quality", "safety", "cost-effectiveness", "quality assurance", etc are in the domain of engineering, not physics.

On the other hand, there is also a discipline called "Medical Engineering", which is basically the old usage of "engineer" as a synonym for "technician." To quote the careers section of the NHS (UK) website:

Medical engineering refers to the process of checking medical equipment to make sure it’s working properly and is safe to use.

In the final analysis, it's an arbitrary decision.

I will say that I voted to close this question, although I do not remember why. I think it was because it was an engineering question (most likely) or too broad.

But I can tell you for sure I did not think "Ah a question about MR imaging...this must be about engineering." I think there are many topics on this site that could be great physics questions as well as not physics questions at all. I don't think the topic alone determines if it is on-topic or not. Therefore, saying "MR imaging questions (or any subject) are on/off - topic" is not something I think anyone should say.$^*$

You have to take it case-by-case. In this case there are two issues. I think that understanding how one builds an image from MRI data is not a physics question. I say this because one could probably think of multiple ways to take the actual data and make some sort of image, but the physics behind MRI will be the same in all cases. Therefore, this question, to me, seems more like an engineering question. How do we take what we know about the physics of MRI, take our data, and produce a useful image? That "the application of scientific knowledge to construct a solution to solve a specific problem."

Based on some discussions in the comments, I think I need to clarify my position in more than just a comment's-worth of space:

I think this is an interesting discussion. I am always trying to understand more about how this site operates and what its community wants. I agree that the distinction is not always clear. As I have been saying though, I do not think a question should be considered on- or off- topic based on its subject but rather based on the question in its entirety. So I agree that MRI, LHC, LIGO, etc. questions definitely deal with physics, but questions asked on this site about these topics (or really any topic) could be on-topic or could be off-topic. The question itself needs to be looked at in each scenario. In case I am not being clear again I will reiterate: I am not saying MRI, LHC, LIGO, etc. should be considered to be “not physics”, “less physics”, etc. I cannot speak to others who originally voted to close, but I am being honest in saying this; I have no reason to be deceptive here. I did not vote to close because the question is about MRI. I am not arguing whether MRI should be considered to be physics.

In my opinion this question was not specifically asking about physics concepts. To me it even seems like the question is saying “I understand the physics of MRI, but I do not understand how the image is formed.” Of course, on its own it is a good and important question. It has attracted many great answers then even still discuss the physics of MRI. However, as others have also stated, a question should stand on its own, not be based on the answers or potential answers associated with it. If good answers or the potential for good answers determined if a question was on-topic, then we would need to restructure many of the VTC reasons. Users should be able to post homework questions without prior work if someone can give an excellent solution. Users should be able to post broad questions that leave possibility of amazing manifestos to posted. Users should be able to post opinion-based questions so that other users can express amazing opinions with amazing discussions. Why not allow really good pure engineering and mathematics questions? Those could garnish amazing answers too.

And I think this is where the issue is. Great answers or potential for great answers cannot determine if a question is on-topic. A line has to be drawn somewhere, and if I see a question that, to me, seems to not really ask about a physics concept (once again, not because it is MRI, but because of what was stated in the question) then I am going to vote to close since that is the policy of the site. Am I being too strict? Possibly sometimes. Could we lose great questions and answers? Most likely, yes. But to me it is less subjective than basing a question on answers or potential answers. Typically questions that could have great answers just belong somewhere else. This is not the only site for amazing questions and answers.

Although, I will say that my answer here is not a petition for this question to be closed. The above is my reasoning and my own thinking. I do not expect (nor want) everyone to agree with me, which is why I am grateful that 5 votes are needed to close a question, and why others can vote to reopen questions. If the community thinks this question is fine, then that is fine with me. But that doesn’t change my own opinion on this question nor why I originally voted to close it, which is what this answer was intended to be about.

Once again, just in case someone still feels like saying this, I am not saying MRI does not involve physics, nor am I saying MRI questions do not belong on this site. :)

Not the answer you're looking for? Browse other questions tagged discussion scope questions specific-question .

2
Are questions about practical definition allowed?
3
Why was this question migrated
6
On-topic answers for seemingly off-topic questions
4
Engineering, what does Phys.SE deem as not Physics?
18
Is error-analysis not a physics topic?
0
Understanding the voting process
29
Little tolerance with mathematical-physics questions
5
How is this question about a black hole passing through the solar system non-mainstream?