Why was this Hot Network Question closed?

Why would this question be closed as Off-topic?

How is a 25-year-old can of soda now empty without having been opened or poked?

The topic seems to be suitable for this site, and the question was also featured as a Hot Network Question and then even tweeted about at https://twitter.com/StackPhysics/status/1231730602472288256 .

Featuring it on Twitter conflicts with closing it. One implies "This is representative of what we talk about on this site" while the other says "This discussion doesn't belong here".

Shouldn't it be re-opened?

I'm going to say no, it should not be reopened, at least not in its current form, though of course I voted to close it in the first place so that's not saying much new :-p

The reason I voted to close it is basically that your question is just asking how some fairly arbitrary thing happened. We get quite a few questions that, like yours, tell us about something that happened in everyday life and ask how it happened. But this site is not a place to get explanations for how random things happened. Here, we focus more on why they happen, specifically in digging down into the underlying physical principles. There didn't seem to be anything about that in your question.

If you had worded your question a little differently, to make it ask more about the physics involved in the situation, it might have been on topic. For example, instead of asking how the soda got out of the can, suppose you speculated that there might have been a tiny hole, and you wanted to know how to figure out what size of hole would allow the liquid to escape in 25 years. That would be a question about physical principles that might be on topic. Or, perhaps you might want to know whether the fizz or the sugar would affect how quickly liquid could escape through the hole. That could also be an on-topic question. Alternatively, you might wonder whether the liquid could diffuse through the side of the can over such a long time. You'd have to do some of the preliminary research yourself, but you could definitely ask an on-topic question about that.

It might actually be possible to edit your question in a way that makes it on topic and eligible to be reopened. Of course, the trick is that you would need to do so without invalidating most or all of the existing answers, since once people have put in the time and effort to answer your question, it's considered discourteous to change the question in a way that makes their answers no longer apply. If you want to do that, you would certainly be welcome to ask for help improving the question in our chat room.

For clarity, let me add that the only thing that determines whether a question is on-topic or off-topic is (perhaps somewhat obviously) the topic of the question. Our site scope is not based on popularity. So things that do not affect the topicality of a question include:

While I can't speak for DavidZ, I will say that I voted to close due to "primarily opinion based". DavidZ picked the engineering reason, so his vote reason is what is shown (to users with high enough reputation).

The reason I chose to close as such is because answers to questions like these usually involve much speculation. Usually the OP either doesn't, or even can't, supply enough information for an answer to be an objectively correct explanation of what happened/is happening. Therefore, answers end up being what others think could be the answer, rather than definitively what the actual answer is. This is very evident in the currently highest voted answer, and this answer even admits that they are guessing.

There is a lot of tension between the kinds of questions our high-rep, long-time users like to see versus the kinds of questions that the automated processes tend to promote. There have been many Meta discussions about this tension, but in general the robots are here to help the people, rather than the other way around. When the Twitter robots and HNQ pick up a question that's not a good fit, the human users step in to emphasize what kind of site we want.

That's not to say anything about your particular question, which I haven't voted on and haven't discussed with any of the close voters. Perhaps one of those people will weigh in with their specific thoughts about your question.

Note that your question can be reopened by community vote; the process for this is described in the help center.

Ryan, since you're the author of the post, you should be able to see the explanatory banner about how the close reason is because your question is more about engineering than about science. You've left a comment suggesting this is improperly hidden from you. If so, can you edit this answer to include your own screenshot? I'll use your image to post a bug report in the right place. 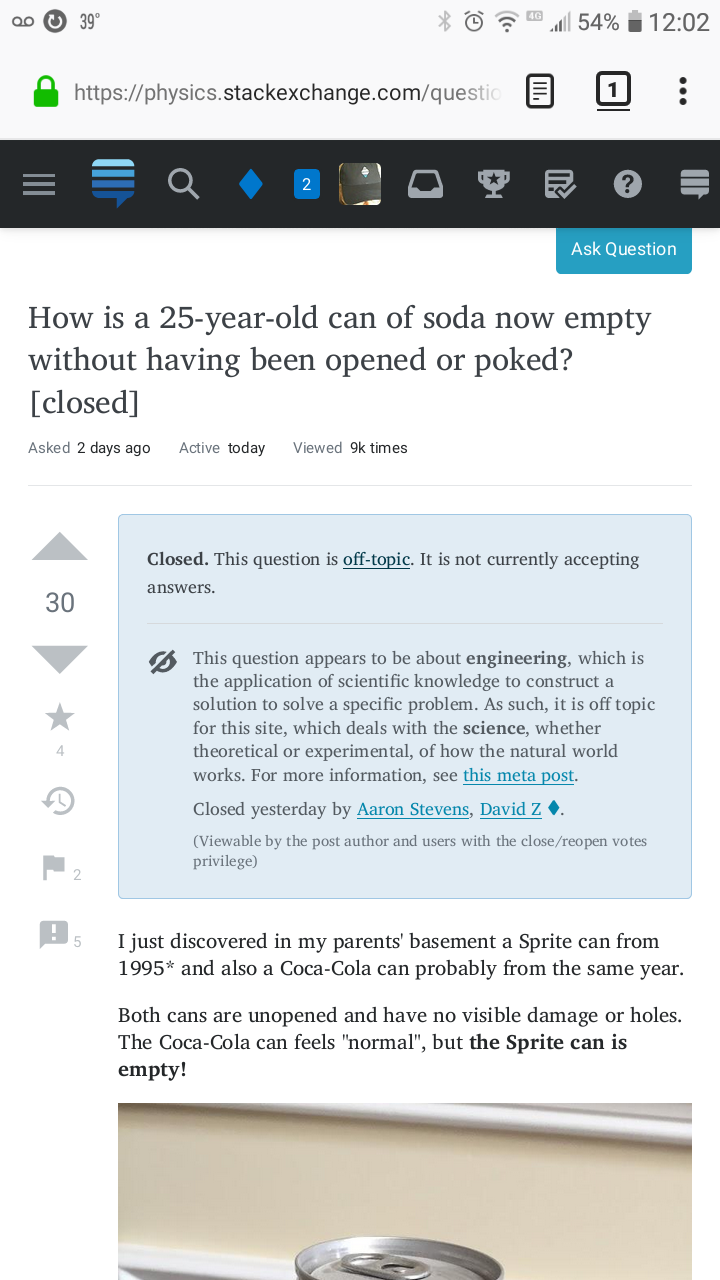 As Stack Exchanges demonstrably (but not really!)† "hottest" Stack Exchange user, I'll add my two cents. It's fine when HNQ's are closed, it shows that the system works.

This may or may not be helpful to you, but one can see the HNQ and closing process as in some ways adversarial processes in the good sense of the word, and not just a source of "a lot of tension" which at least sounds like it could be bad in some ways (in the sense that Stack Exchange angst is bad).

The nonlinear HNQ system amplifies views and brings some questions to more eyes than they would have otherwise been exposed to, and the views can lead to more up votes, down votes and close votes. In my opinion the result, though imperfect, ends up okay most of the time.

"high-rep, long-time users" are a great resource as long as they are comfortable with how the site works. If they don't like how the site works and can't compel or induce changes they find satisfactory and the community doesn't do it with (or without) them in mind, then they go away. Human nature is what it is, and adversarial systems, while not always pleasant are still the worst systems, except for all of the others.

†(174 HNQ's, here's a list) note: I'm not taking this seriously, the numbers are real (but incomplete) and I'm using "hotness" strictly tongue in cheek.

Not the answer you're looking for? Browse other questions tagged discussion scope specific-question close-reasons reopen .