We like to see MathJax used on Physics SE for equations, but at present when you are typing in a new question I think there is no on-screen link to the MathJax "guide" or a reminder to use MathJax for equations.

There is an old Q&A on Physics Meta which says that this has been implemented, but it's not there now so must have been removed during site updates.

On Physics SE this would ideally be prominently above the edit box in bold maybe.

Certainly if we don't even mention MathJax to new users until after they've posted we're just asking for having to repeat the same thing in comments over and over.

I think it would be useful to have the MathJax help link (at Math Meta) in the Your Answer menu bar in addition to the Question Dialog. It would help both new and experienced users who are giving answers have that resource while constructing an answer.

It might also help new users to realize that they should use MathJax rather than taking photos of textbooks to supplement an answer.

I've just got a ping from colleagues that the link was added. Please take a look 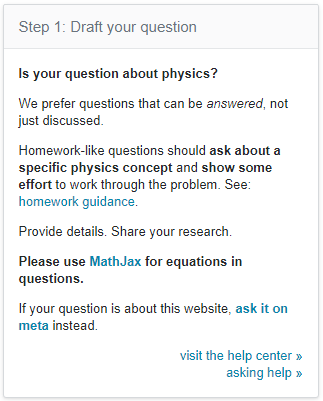 We hope it is what you've requested!

Not the answer you're looking for? Browse other questions tagged feature-request status-completed questions mathjax .

2
How about common edit summaries and common comments?
5
Link to meta page for guide to MathJax commands under text fields (specifically for user agent mobile)
11
A review queue for misused tags
2
Should I myself edit the question or encourage the OP to do so?