It is about time to start thinking about the final design of the site; please turn on your creativity and start posting:

Not another atom. Absolutely. Maybe some logo with a $\Psi$.

Dark Energy for "not found", of course, will do. But I think the most suitable here would be the higgs boson (at least up to now).

Edit: I've checked how other launched sites look like and I really don't like the look of some of them. Too many bright colors or too many tiny details are really distracting. I actually like the present "scetchy" look -- maybe one can adopt it from "notebook scetchy" to "white/blackboard scetchy".

Edit: This is what I made a minute ago, using my blackboard: 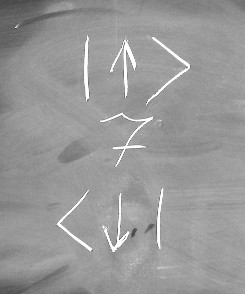 I tried to use ladder operators but they didn't look nice...
While I think that bra-s or ket-s (better ket-s) should be used for tags, don't they?

How about a sketchy inspired chalkboard design?

If we're to have any graphical motifs there should be a Feynman diagram included. And something that references classical physics (Maxwell's equations? The classic Keplerian areal sweeps on an elliptical orbit? Ray optics?), and something that talks to experiment (a graph with real data including error bars/bands or an event display from a Fermi top quark event or ...).

Lets have a diverse set of representations. Physics is a big field, let's show it.

The tex.SE header provides one template for how this might be done, but I confess to not liking the overall layout very much. I do like the ghostly figures in the header, however.

Since you mention upvote and downvote buttons, it would be neat if we could somehow tie them into the raising and lowering operators. But I can't think of a way to do it that wouldn't be excessively nerdy.

I actually kind of like the design for math.SE, with a few exceptions. The graph paper in the background I could do without, of course, and I don't think parentheses are enough to visually distinguish the tags, and I'd like the upvote and downvote buttons to be a little more colorful, and it wouldn't be that bad to have some faint colors to highlight some of the regions in the right sidebar. But I do like the general feel of simplicity, e.g. using a pure white background and simple, thin lines to separate sections of the pages, along with a bold logo and site title at the top.

Also, I think the logo for webmasters.SE is pretty nice. Of course we're all tired of classical atom models so I'm not saying I would have wanted that logo for this site, but I am a fan of the use of the three primary colors (which corresponding to quark colors, coincidentally enough), and the subtly highlighted globe which is unobtrusive against the blue background of that site.

Actually webmasters.SE has a pretty plain look as well. It's probably my favorite of all the SE site designs. My only real criticism is that it's a little too blue for my taste; I prefer to have just a tad more variety in the color scheme.

I actually love this look. The thing is that I've been around polished websites for so long that they glaze over my head. Looking at this page is just a sight for sore eyes. Let me tell you why. As someone who dabbles in design I think that sleek, sophisticated design is overrated. Simplicity isn't.

Right now what you have is just an unpretentious page on which the content flows out. It's like a blank sheet of paper waiting to be explored. Waiting to be written upon. There's nothing there but pure nothingness. ;)

So, why dress it up?

If you've seen the design for Hacker|News it looks so primitive at the start, but the fact is that it performs a function it acts as a barrier against the 4Chan/Digg crowd as there is nothing there on the site, but the content itself. No videos. No dressup. No "social features". Just the content. What can be more beautiful than that?

To me that's the highest possible form of design. Paul Graham has tweaked it so that it actually encourages the participation of his target audience and acts as a repellent against the gremlins. What could be more beautiful than that?

So please keep our site like this. In fact, if you can remove the nifty design tricks that you've built into it. Just make a blank sheet of paper and we, the community, will do the rest.

At the moment, the most popular question tags are quantum mechanics, quantum field theory and general relativity, so Schrödinger equation or Feynman diagrams are perfect elements for the site design. On the contrary, decorating the site with elementary pictures of interference, white light dispersion or pendulum motion would give Physics.SE an 'easy' look and would probably attract lower-level questions.

I've been thinking a Feynman diagram of Higgs decay or neutrinoless double beta decay would be great for the 404 page, if we get to customize it:

(the former is my own creation, the latter is public domain from Wikipedia, so either of these could be used directly)

Dark matter or a magnetic monopole would also be decent possibilities but I can't think of a visual representation of either that carries as much "punch".

Something I think we should avoid is overly representing mathematics or equations in the design, so no Schroedinger equations or nablas. We should go for a physical phenomenon. My personal preference would be something actually visually observable, for example with the naked eye or under a microscope, not just a plot of something. My personal preference leans toward optics, so for example a diffraction pattern. Perhaps a standing wave pattern from acoustics made visible in some fashion?

25
Design for Physics-SE
22
New Site Design
8
Ideas for 404/error/captcha pages, take 2
3
Do we like the current background on Physics SE?
3
Sombrero / grid logo

22
New Site Design
20
What should we name our chat room?
11
What's the health of physics.SE? And what does the future look like?
15
What will our list of close reasons look like?
9
Questions that look like senseless, but with sensible answers
8
What would it look like if rep for questions counted the same/more than answers?
3
Is our site due for a redesign?
29
Let's not have posts look like revision histories
7
Serif fonts like Chemistry and Math