Just a comment-Why is this site so inactive?

Why is this site so inactive? In hours, a few questions pop up. Other SE sites are relatively active. Considering how wide physics is and how active other SE sites are, this seems terribly slow to me at least.

I feel so because I know, pretty high profile people were here. This must be a pretty thriving community.

Or is it because there is some pick hour?

As for the question, is there any way, we can grow this community?

Actually, we get on average 36 questions per day, which is typical or a bit above the median for all sites in the SE network. I don't see much support for the assertion that most other SE sites are more active than this.

Of course, growing the site is always something to think about, regardless of how well we are already doing.

Asked a question with no votes, no answers, no comments, and low views for a week.

I wanted to celebrate my accomplishment, and I thought it would be applicable to this question. So I went to the badge page and copied them all into Excel:

From the data I just teased out a list of dates. It then follows that a single tumbleweed was awarded in the course of every interval between one time stamp and the next. What people really like to see is graphs with time as the x-axis, so we just add one tumbleweed to the total to get the total number of tumbleweeds at each time stamp value. 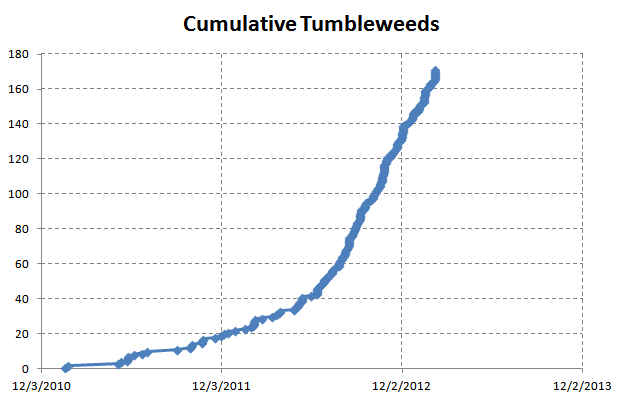 Interesting! What a unique metric the tumbleweeds are. In a simple since, this represents the number of questions that fall by the wayside. It's very much a "long tail" sort of occurrence, so I don't know that it really reflects anything about the user number or activity. It's its own very unique thing. It is interesting that the slope seemed to change sharply (like a 'hockey stick' graph) around the middle of 2012. Sorry the years are a little bit difficult to read. This graph's regions represent 2011, 2012, and 2013.

Interesting, this also seems to show a behavior change around the middle of 2012. You need to mentally shift your time scale to directly compare them. How does this compare to the tumbleweeds? It could be said to be consistent. After all, if the number of questions went up around that time, the tumbleweeds might have followed proportionally.

So traffic is up. However, these combined data sets suggest a novel explanation for the observation in the OP. Maybe, while traffic is strong, attention to individual questions hasn't improved, and maybe some people feel like they get an echo when they throw something into the void. I can imagine that people felt similar things when Stack Overflow was growing. It seems like a contradiction, but it might make sense.

11
What's the health of physics.SE? And what does the future look like?

4
Withdrawing from the election
9
Editing old meta questions
11
Why is Phys.SE so restrictive in the Q&A it is willing to accept?
21
Why was this Very Low Quality flag declined?
14
The site that refers the most visits to Physics Stack Exchange is…
13
Getting a better understanding of how and why off-topic homework-like questions get answered before they can be closed
8
Community Ads for 2021