A distinctive mark for the most voted answer

Yes, the most voted answer floats to the top. But somehow the green mark is indirectly telling the (specially casual, unregistered) reader something like "this one is better".

I think it would be good to have another mark, say in blue, adding to the most voted answer that sort of "visual quality mark" that the green mark adds to the elected answer. You all know that it is not uncommon that the best answer (from the point of view of the reliability and correctness of the contents) is not the one that the OP elected, but the most voted. The fact that the most voted answer appears on top of the list merely enhances its visibility, but somehow I feel that this not "validating" enough. 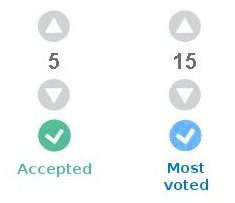 Perhaps the green text would better be "Accepted by the OP". But that is more or less the idea.

Eventually this is equivalent to a system of badges (though quite simple) for the answers, with different colors: accepted, most voted, and perhaps: more than X votes, etc.

I'm not sure I agree with this being necessary but let me do a premise: The accepted answer does not mean that "this answer is better", but rather that it's the one that helped the OP in his question/problem.

Does it mean it's the best answer? Maybe, but maybe there's a solution the community likes more and that gets upvoted more. This doesn't mean the OP is compelled to accept it. He could but the other one is what probably solved the problem best.

The distinctive mark is not a bad idea per se, but I think it would just add clutter to the interface. The most voted answer is usually listed second (when sorting by score) after the accepted one. I think this makes it pretty visible to users. Note that this is not true with self-accepted answers. In that case, the sorting is done purely by votes (ignoring the check mark).

The most voted answer is already easy to locate: it has the most votes. So this is why I'm not really convinced an extra mark would add that much or solve a problem (which I don't see).

If you really want to "mark" the most voted answer, I'd say that:

That is: if the community really wants it and it gets implemented. But I'm not convinced it's really needed. What issue would it address? Would it really get rid of confusion without adding more of it in other ways? Those are the questions I'd answer before adding the feature.

Not the answer you're looking for? Browse other questions tagged feature-request answers accepted-answer .

30
Pseudo-answers are the enemy
0
“Questions” containing links to the most relevant questions
2
The secret to getting rewarded for high-quality answers is ___
2
Opinions: When are or are not they answers?
8
Remove the reputation cutoff for the answer ban
3
Should I prefer the most up-voted answer or the accepted answer?