What rules do moderators follow in deleting comments in an ongoing discussion?

I recently asked a question on meta "Will my account be closed like that of [insert-here-the-user-who-shall-not-be-named] if I stop participating on Physics SE?". It was being downvoted so I added a comment below it "why downvotes?". This was followed by a (peaceful) discussion between me and Manishearth. During this discussion Manishearth told me that my question broke no rules and so (on this basis) i refused to change the title of my question. However then one of the moderators (Shog9; who, as I just knew, is also a stack exchange employee) came and deleted all the comments also changed the title and main body of my question. I further added a comment that the changed title was not what i asked, to which he only replied after two days.

I want to know the rules moderators/stack employees follow in deleting comments in an ongoing discussion. Manishearth in his answer below says that there are no rules which, if true, is ridiculous because you can never question the action of a moderator even if s/he deletes some comment which is very useful to the discussion.

In general, yes, comments can be deleted at will, so there are no rules.

Usually, we refrain from deleting comments on meta if there's an ongoing discussion.

However, meta comments will be deleted if:

Finally, "please explain the downvotes" is a rather pointless comment, especially on Meta, where downvotes can express disagreement (So the downvote just means that someone disagrees with the post or its premise)

You have some good answers here already, but since I was the one who deleted the comments I'll take a few minutes to explain why.

This all started here - someone mentioned Physics, and upon visiting the meta here I saw 4 different threads calling out a specific user. As mentioned in the thread I linked to, this is something we generally try to avoid: there's nothing to be gained from publicly humiliating someone, particularly someone who isn't here to defend themselves. While a certain amount of curiosity is understandable, leaving these threads up long-term to be indexed by Google is kinda cruel; we frequently get emails from folks who are concerned about their online reputation and looking to distance themselves from mistakes in their past - no need to add to that.

So I deleted or edited these threads. While doing so, I observed numerous bitter, unproductive, tangential conversations - as EnergyNumbers notes, such comments are subject to removal without notice, so I removed them.

For the record, this is the guidance I gave the moderators at the time:

I know I've said this before, but... Try not to let threads discussing someone's suspension hang around forever. They rarely lead to anything good. Either edit to generalize them, or remove them once they've quieted down.

The ultimate goal here should always be to provide something of value to future readers. I doubt you're the only one who'll ever be concerned about suspensions - therefore, it's worth providing a clear, easy-to-follow discussion for those that follow. Lengthy comment threads hinder this goal - they are distracting and push actual answers further down the page. Comments that speculate on offenses committed by another user are particularly unhelpful - common decency dictates that one should address others directly with complaints rather than talking about them behind their backs. Expect the current comments on that question to be removed at some point as well, once the current discussion is concluded.

There are no rules that set the limits of what cannot be deleted, so any comment is fair target for deletion. That's because comments are, by design, second-class material, ephemeral and disposable. They are there to seek clarification on questions and answers. Once they've served that purpose, they can be disposed of.

Comments that are used to try to subvert a Stack Exchange site into being a medium for discussion, rather than Q&A, are always fair target for deletion.

There are rules that set out what must be deleted: material that is illegal, offensive, or that breaks the sites rules. The comment-flagging box gives you a good guide to this: 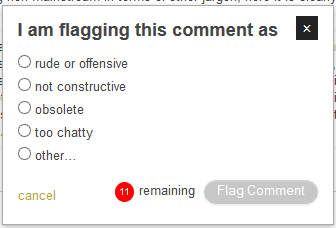 But in short, never put in comments something that you should put in a question or an answer: if it's got merit, put it in a first-class container (Q&A), not an ephemeral, disposable second-class container (comments)

long comment chains are sometimes allowed on Meta when they are constructive, but Meta is the exception not the "rule" ... So one may see long comment threads here, but they may be deleted at any time for any reason. Particularly when they are not on topic any more.

Not the answer you're looking for? Browse other questions tagged feature-request moderators comments .

13
Why did my comments under the community ad for physicsoverflow get deleted thrice?
9
Comments deleted under my question
3
Will my account be closed if i stop participating on Physics SE?

6
Can we have "Astronomy" added to the logo? If not, why not?
37
Can the Mods please stop overeagerly move comments to the chat?
3
Can moderators take down comments that are not breaking any rules just because they don't like the comment?
4
Please help me convert the comments on this question to "let us continue this discussion in chat"
3
Is it okay to get into a long to and fro discussion in the comments?