When a question is asked on the wrong site, it can be migrated to another site via the flagging function. Why is this migration limited to only a few sites? It should rather be a list of all sites to choose between.

Specifically, from my point of view a specific question is better off on the Engineering SE site. But I only have the math SE site and the meta site as possibilities for migration: 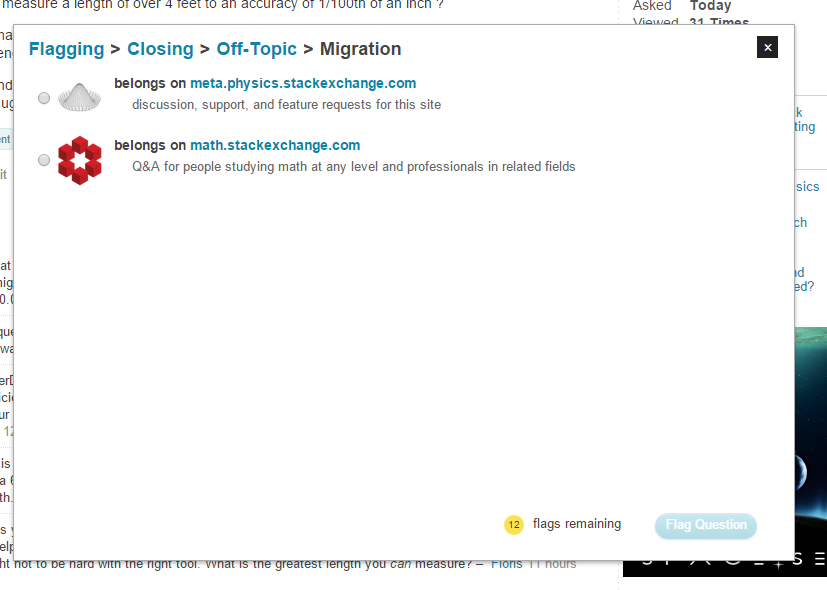 There are two main concerns here:

However, this does not mean it's impossible to migrate content. Moderators can migrate to any site and will do so if you flag the question and the migration is appropriate. There is at present a low load of migration candidates and it can be managed well by the moderators. Within the past 90 days there have been 39 migrations to math, 19 to electronics (with 15% rejected), 9 to History of Science and Maths (with one rejected), 8 to Chemistry (with 2 rejected), and 5 to Engineering. It's really not worth it to set up a default channel - even for Chemistry, which is already graduated.

Not the answer you're looking for? Browse other questions tagged bug status-bydesign flagging migration .

3
Should the engineering close vote be changed in light of the new engineering SE site
3
SciComp migration option?
6
Why don't we add the option “other sites” in the close votes option?
3
Add an off-topic migrate to Chemistry.SE close reason
2
Should old questions about history of physics be migrated to hsm.se?

12
Should we include other StackExchange sites in the close vote options?
9
Bounty icon is poorly placed
21
Why was this Very Low Quality flag declined?
3
How to check what's happened to my flag?
25
Flagging low quality answers: an experiment
4
What constitutes non-answers?
3
How should I handle questions that could belong to physics.SE and other, more specialized, Stack Exchange websites?
6
Why don't we add the option “other sites” in the close votes option?
1
Can this question be migrated, if the reason to close it was specifically being off topic and more of an engineering question?