What is the reason that there are so many questions at this stack (physics) comparing to the others?

As far as I know on this physics stack are far more questions posted than other stacks. But why is that. I can't imagine that a study of biology, chemistry or history etc. would comprise less detailed information or question. Is that because in physics is so much unclear comparing to other studies or is it very difficult to understand is well, or are there just more students doing physics or is it just more interesting?

Looking at the sciences only,1 the total numbers can be found here (sorted by total number of questions). I've made an abridged table here:

All of these sites are more than 3 years old (with MO, Math, Stats & Physics all being more than 5), so I don't think time is a factor here.see below What probably is a factor is the number of users:

Why there are 5 times as many users here, I'm not sure. But, I suspect it boils down to several factors: site policy, popularity (both academic & general interest), and difficulty of subject among them.

It was presented in the comments that age should be a factor in the number of questions. On a naive level, it makes sense: if you've been around longer, you're likely to accrue more questions. And this is sorta backed by data:2 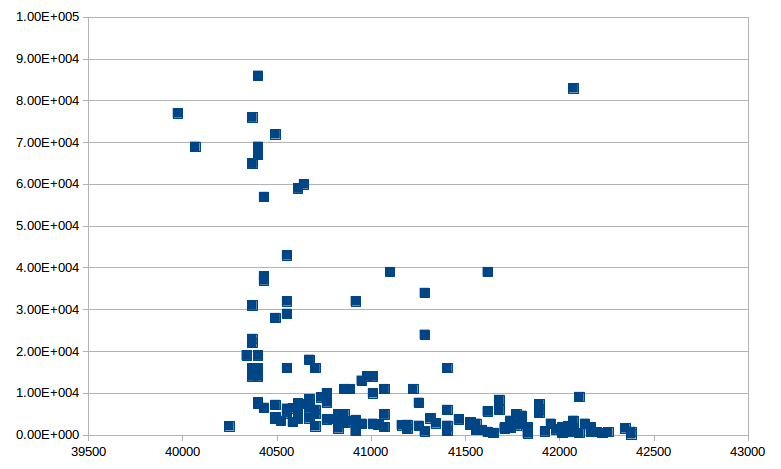 All data taken from the SE team, but I'm putting a cap at 1e5 (which ignores a few sites, including Math.SE & SO).

Which is just fairly inconsistent with the naive hypothesis that age should be important. Going back to the graph, there are some younger sites that have more questions than older sites, including Russian SO (81k questions in 1 year)!

So while it's reasonably true on a very naive level, I don't see how someone can claim it as an important factor, as was done in the comments.


1. The technology sites dominate, with Stack Overflow having over 11 million questions at the time of writing; Ask Ubuntu & SuperUser have more than 200,000 questions as well. All three of those sites have more than 300,000 users as well.
2. A log-linear version of the plot can be found here; this shows the roughly linear fit (meaning power-law relation, roughly n=-71 at R-sq=0.47).

Not the answer you're looking for? Browse other questions tagged discussion questions .

14
Question with a lot of discussion in comments remains closed for being unclear
15
July 2017 Ask Me Anything with Jim (long may he reign)
8
Why physics SE is much more inactive compared to MSE?
2
Are there guidelines for reopening questions?
6
Why was my question about the Devil's problem deemed a homework question?
10
Are there any advanced undergraduate study chat rooms on Physics Stack Exchange?