Acceptance of an answer 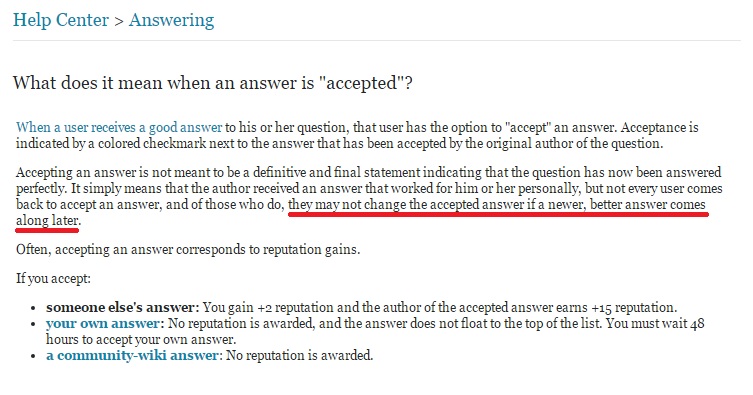 But this happened for my answer.

Am I misunderstanding about sentence that I have specified by red line?

I think this is just a misinterpretation of the language used. The phrase:

they may not change the accepted answer

they cannot change the accepted answer

It means that even if a better answer comes along the OP isn't necessarily going to change which answer they have accepted. They may not think the new answer is better, or they may simply have abandoned the site and never returned to check for new answers.

I have had answers of mine unaccepted months or I think even years after they were originally accepted. There is no time limit for an OP to change which of the answers to their question they accept.

Am I misunderstanding about sentence that I have specified by red line?

You understood the underlined clause, they may not change the accepted answer, perfectly. That clause is in the present tense and uses may as a modal verb to denote permission (or in this case, the denial of permission). Since questioners are allowed to change the selected answer, the clause is grammatically incorrect. The clause should have been phrased in the present perfect tense rather than the present tense, and because it reflects a possibility that might or might not have happened, it should use might rather than may.

A correct rewording is they might not have changed the accepted answer.

As a follow-on to this question, I asked how to suggest edits for help center pages. It was suggested that I use the "contact us" link. I did just that and suggested a rewording.

The wording at the cited Help Center page has just been changed. It now reads

Accepting an answer is not meant to be a definitive and final statement indicating that the question has now been answered perfectly. It simply means that the author received an answer that worked for him or her personally. Not every user comes back to accept an answer, and of those who do, they might not change the accepted answer even if a newer, better answer comes along later.

Not the answer you're looking for? Browse other questions tagged support .

5
How to suggest edits for help center pages?

2
Sock puppetting? Meat puppetting? Vigilante Mobs? What's up here?
1
how to write delta symbol in a question
0
Is Phys.SE mainly for expert-level questions?
3
How can you tell when a question that's been put on hold has been reviewed?
0
layout of the text
5
How to suggest edits for help center pages?
2
Cannot find a question upon statistical mechanics I commented on
7
What does the red circle mean next to a review queue?
2
What does the sentence below, which is only visible in the edit mode of an answer I gave, mean?
0
Negative rep score when neither question nor my answer were downvoted