I want to ask a question along the lines of "What would we see if there are four accessible spatial dimensions, and we are 'lifted up' then rotated in the fourth axis?" It will be hard to explain/assess this question without details, so please be patient:

In Flatland, there exist fictional flat creatures who only know 2 spatial dimensions, or only 2 perpendicular spatial axes. In the 3-dimensional world, we can lift a Flatlander up from its flat habitat, and rotate it so as to make it no longer parallel to the plane of its original residence, this will allow the Flatlander to see the insides of its fellow flat creatures. (See picture below:) 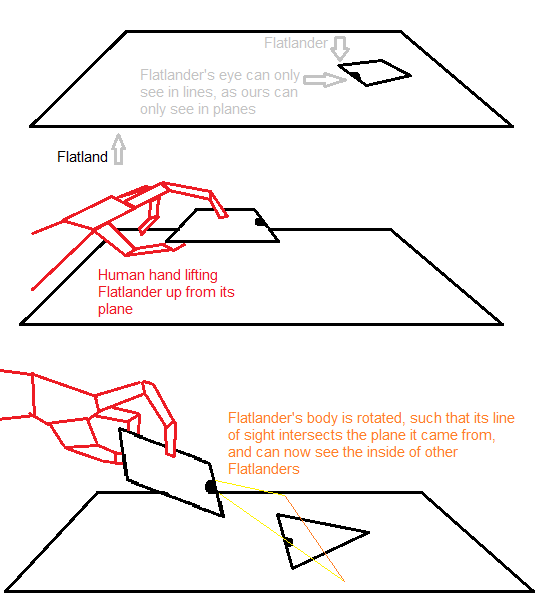 The question I want to ask is: what would a human see if it is lifted up and rotated like that by a four dimension being in four dimensional space? In particular, how should the vision of such an individual be depicted? As in, should the person see the interior of other people's internal organs? Would the effect be as though the flesh on the observed be stripped off? What about hallways and solid geometric shapes?

I am asking the meta question to find out if such a question belong to the domain of physics S.E., or maybe visual design would be a better place?

My answer to these sorts of questions is generally "just ask --- don't ask permission to ask." If it's off-topic, it'll get closed, and there won't really be any hard feelings.

That being said: seeing as how we don't have any evidence that our three-dimensional space is any sort of surface in a four-dimensional bulk (with thoughtful meditations on spacetime and brane theories omitted here), this particular question might be as happy or happier on Mathematics.

Not the answer you're looking for? Browse other questions tagged discussion questions .