Should discussions on topics which disturb long time users of the chat room be banned?

As some of you might know about the "argument" which took place between me and another long-time user of the hBar about discussion of "JEE related stuff". As far as those discussions are concerned, they are mostly related to Physics, Math or Chemistry at the high school/ Olympiad level (you can check the transcript).

However, it seems some people were disturbed by those discussions and told us to stop (or create a new chat room). Even one of the moderators warned me that he would kick-mute me if I kept discussing those topics with some other members of the chat. What disturbed me most were comments like:

0celo7: "I don't hate JEE, I hate when this chat is invaded by JEE people"

0celo7: Because it's uninteresting, annoying, and I was here first

ACuriousMind: Let me phrase it like this: If you do not respond to friendly suggestion I will kick you from this room if you continue to discuss things when other regulars have expressed a preference for you to take it somewhere else. I would much prefer not to but this room is not yours to hijack against the express wishes of others.

So my query is:

Does the stack exchange system have any documented rule which bars discussions which might disturb one or two long-time users of the room?

You left out a lot of context; I'm tempted to think you're just cherry-picking bits of that conversation to make others look bad while ignoring your own behavior and how it contributed to the situation.

Here's something I would consider a really critical bit of context: 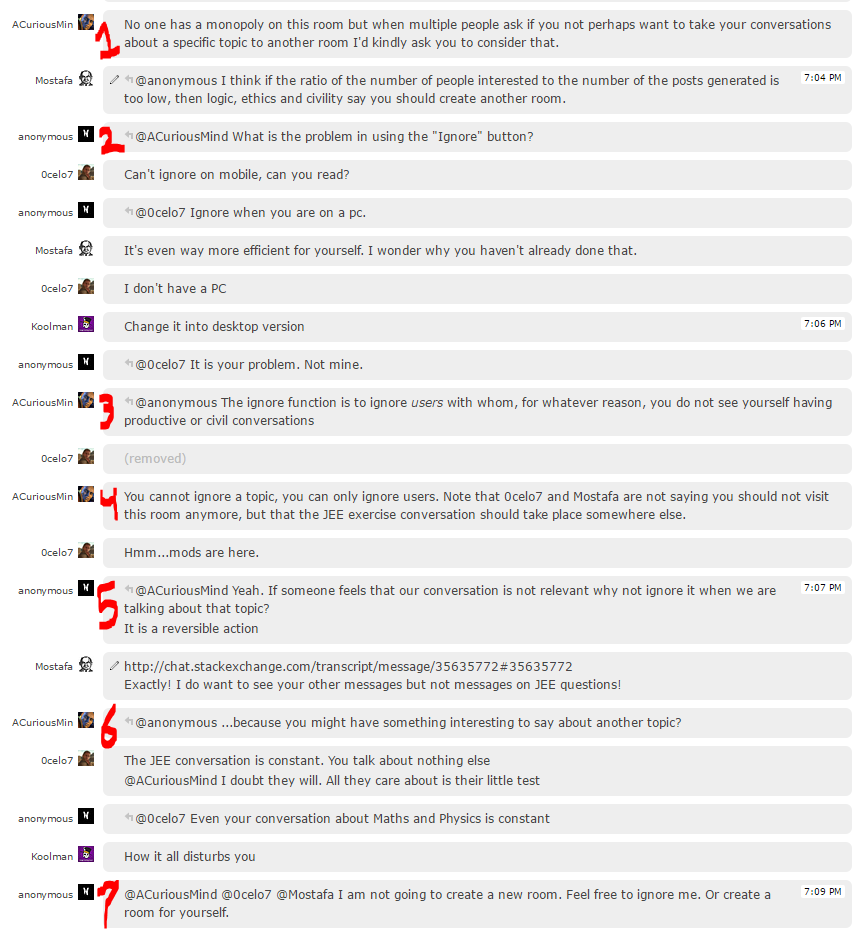 (for casual readers: "anonymous" in this thread is the OP here, the user now calling themselves "2017")

A summary of this conversation:

Social situations fall apart very quickly when participants cannot respect each other, and this is no exception: you're going out of your way to disrespect others, at very least refusing to give any credence whatsoever to their concerns; in return, you garnered a fair bit of disrespect from 0celo7 and, eventually, ACuriousMind. Thus, the situation broke down.

The least-painful way to handle situations like this is for all participants to stop and consider the needs and desires of others before insisting upon their own, then work with each other to achieve compromise. As ACM suggests,

It's a chat room, talk to each other, figure out a way to coexist.

...but if someone is unwilling to do that, it is imperative that the room owners and moderators step in to remove them from the situation before social order breaks down. You should've been kicked out of the room the minute you flatly refused to consider anyone else's point of view; please keep this in mind for the future.

As background to my message cited in the question, I said this earlier in the same conversation:

No one has a monopoly on this room but when multiple people ask if you not perhaps want to take your conversations about a specific topic to another room I'd kindly ask you to consider that.

This already answers the question posed here: No one has a monopoly on the main chat room, or the absolute right to restrict the topics discussed there as long as they do not inherently run afoul of the Be Nice policy. We had a rather lengthy discussion about this related to this meta post, where in the end we decided that the moderators also will not restrict the topics discussed for any other reason.

Nevertheless, the point I wanted to make in those messages is different: Because of the shared nature of the room, not only does a single person not get to restrict the topic, but also the people present should try to work out a way in which they all can use the room. This, of course, requires compromise - if a lengthy conversation between a small subset of users disturbs the others, and they express their wish those users take it elsewhere, then the courteous thing to do is to take it elsewhere. Creating a new room costs you nothing (provided you have 100 reputation) and clearly resolves all the tension instantly. I'm not saying one is obligated to do that, but I expect that there will at least be a reasonable and civil conversation about the refusal to do so.

If there are good reasons to keep the conversation in the room (e.g. it's of potential interest to a large set of other users or directly related to site policy or other matters of relevance to the physics.SE community as such), then one should talk about that and ideally the users disturbed by the conservation should show some insight and acquiesce. If it seems that some users are frivolously or one-sidedly requesting conversations to be moved on spurious grounds, one may also talk about that.

None of this happened in this instance. The main response was "just ignore us if you don't like the topic", which clearly ignores the shared nature of the room, and the conversation, instead of trying to find a consensus or compromise, quickly degenerated into mutual attacks and unconstructive comments. This is not desirable behaviour and basically spoils the room's atmosphere for everyone, which is in no one's interest.

It's a chat room, talk to each other, figure out a way to coexist. Merely insisting on others keeping their conversation out of a room without compromise or explanation is not constructive, and neither is insisting others just have to live with whatever you decide to fill the room with. This is not an issue hard-coded rules could satisfactorily resolve, so there are none.

Let me be very, very clear about a couple of things.

Because of the public nature we insist on a grown-up approach to delicate or controversial subjects.

Because the the shared nature, no particular user is not entitled to insist that some topics suitable for polite company not be discussed.

On the flip size, if you are engaged in a long-running discussion that many other users of the chat find distracting, disturbing, or inappropriate it is only polite to take your discussion to a place where you won't 'scare the horses' (that is, cause a ruckus). That's because you don't own the room any more than anyone else does.

The point is that the h bar is a shared resource and you should be sharing it. Bring your sensible manners and your good will.

Not the answer you're looking for? Browse other questions tagged discussion chat .

4
Chat and the moderation thereof
13
How can we improve the participation of subject experts and enthusiastic physics students in chat?

18
What should we name our chat room?
17
Opt-in to be always pingable to answer questions
8
How do I find the chat room?
8
Raising issues with the chat room
12
Choosing the name of the chat room
4
Chat and the moderation thereof
23
Why did I get chat suspended for a year?
13
How can we improve the participation of subject experts and enthusiastic physics students in chat?
11
Should we cancel the fortnightly chat session in the Physics chat room?