Adding picture, what is framing?

In order to improve this post, I was trying to add this picture(it doesn't load here either) to it ; but what I get is:"For security reasons, framing is not allowed; click OK to remove the frames." And then I'm redirected to another page with a big Oops in it.

What does this mean? I thought it might be because of the descriptions below the photo, so I removed them and tried again, without any success. Can anyone help me with this regard?

I will upload some pictures of the sequence of what happens: 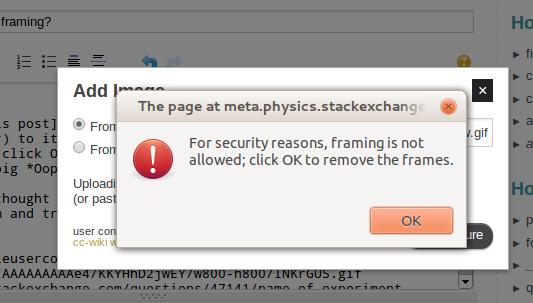 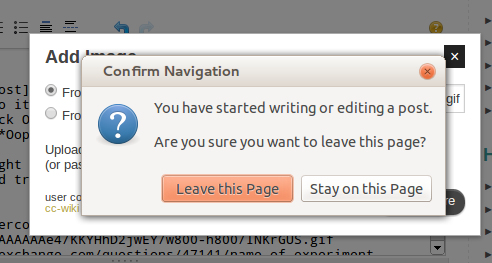 Apparently it throws this exception on large animated GIFs. I took a screencap of a certain anime I'm watching and converted it to a GIF here. It's over 7 megabytes and gives the same error.

For the record, this exception comes from a frame buster used to prevent clickjacking, CSRF, and the like. Basically, it prevents you from putting an SE site within an HTML frame on a different domain.

The image uploader does indeed use iframes, the response is delivered in a same-domain iframe which then calls a callback function in the parent frame1. However, being same-domain, that error should not get thrown.

I assume that the large image is breaking something, causing the inner page to seem to load on a different domain (abut:blank maybe, that's what it looks like)

1. I'm not entirely sure why they haven't used a simple POST request here, but they probably have their reasons.

Not the answer you're looking for? Browse other questions tagged bug status-reproduced editing suggested-edits .

1
What determines if a post is editable?
2
What can we do when other users denature your answer by editing it?
2
What happens if a question is edited after we answer it?
20
What to do regarding suggested edits that cure self-vandalism by post owners?
5
What happened to this question's commutative diagram?
6
What does the red circle mean next to a review queue?
2
Adding length-contraction tag won't work