Is the demise of Stack Exchange (as we know it) ineluctable?

I feel concerned about a thought that I had recently.

I am wondering if the current policy about duplicate questions may become problematic in the (very) long term for the health of Stack Exchange.

Let me explain: as far as I understand, questions are marked duplicate when they have already been asked on the website at some point in the past. Thus, I can't help but consider the possibility that, at some point in a far future, almost every single question would have been already answered on Stack Exchange and then marked as duplicate.

Eventually, this website would just end up being a massive database of Q/A, with virtually no activity. On one hand, that would be great for readers, but on the other hand, users who love to challenge themselves, learn and share their expertise may lose interest as the activity slows down to zero.

What do we want for the future of Stack Exchange? What do you suggest? Am I taking this way too far?

EDIT: Using Chair's contribution in the comments, I produced a graph that shows the evolution over time of the percentage of questions marked as duplicates: 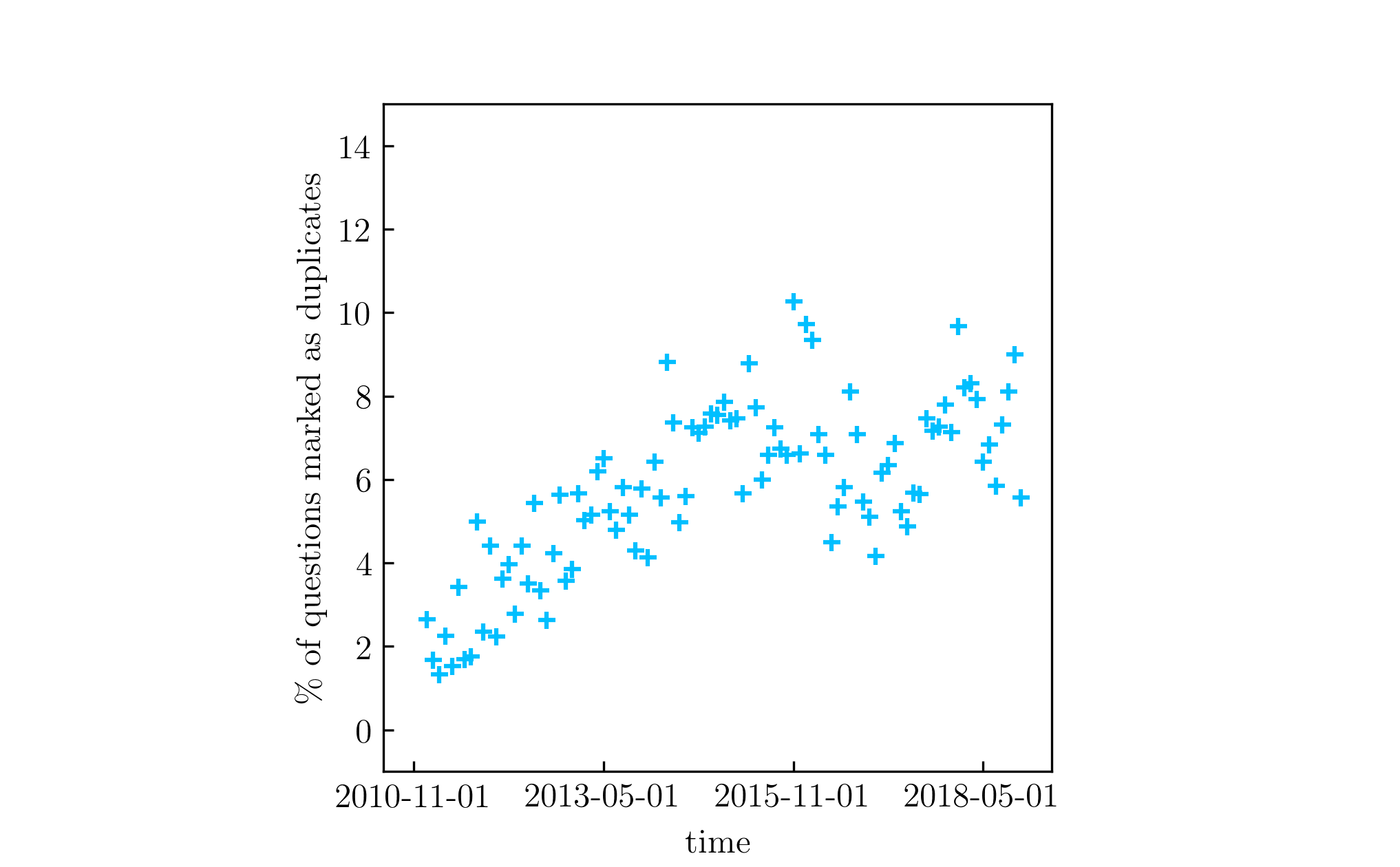 The data, obtained via this query covers the statistics of the website between august 2010 and november 2018. Between 2010 and 2015 the proportion of duplicates increases steeply, however something strange happens around 2016-2017 and then it is hard to tell if the curve is starting to increase again or stabilizing around a constant value of $7\%$.

It will be interesting to see how this curve behave in the future.

and then it is hard to tell if the curve is starting to increase again or stabilizing around a constant value of 7%.

I don't think this is hard. It's pretty obvious to me that the duplicate closure rate has saturated at a value of about 7%. This is vaguely high for SE standards but not something I'd be at all inclined to worry about. Here is a copy of the query Chair linked to, which can be readily switched to other sites, to look for precedent in older databases and sites with a higher throughput.

The clearest example is Mathematics Stack Exchange, whose historical duplicate closure rate looks exactly like ours but with a longer stabilized period: 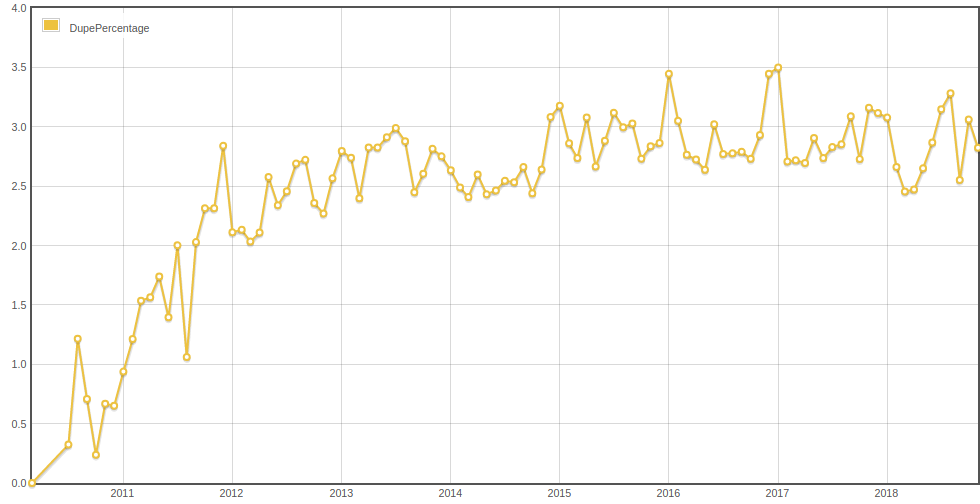 You get a similar situation in Cross Validated: 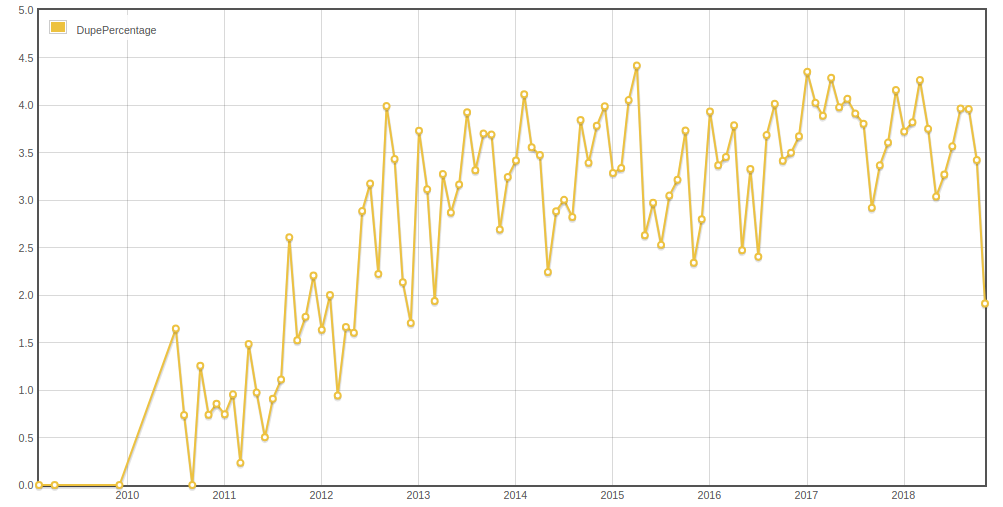 There's a fair bit of variation site-to-site, but there's multiple instances of the rise-then-saturate behaviour that's evident in the Physics data, 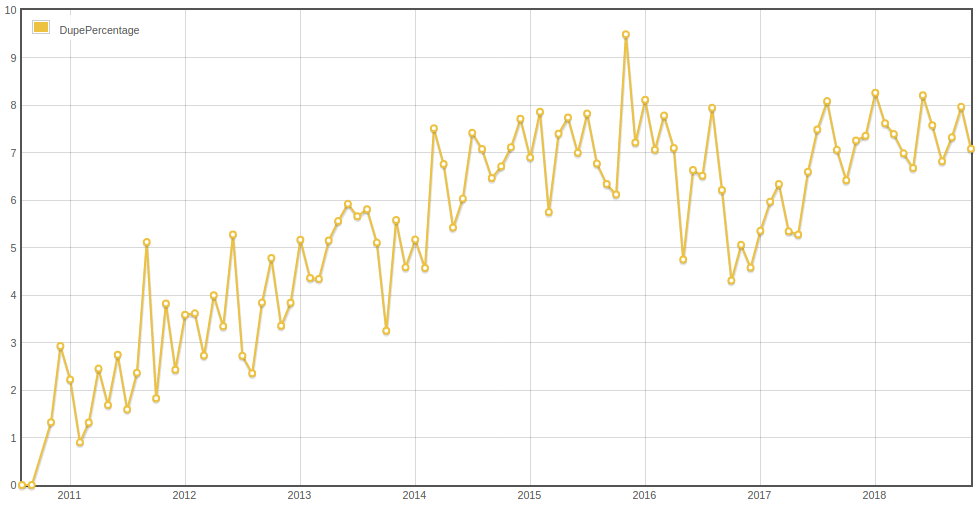 so I really don't see how the current historical data is in any way a cause for concern.

To paraphrase John, when you say

I find that to be an unrealistic assumption.

As long as there are new inventions and new discoveries, there will be new questions.

For the network as a whole: find your favorite programming language that is less than ten years old, and search for questions about it on Stack Overflow. Or on Area 51.

For physics in particular: consider the timely questions about the OPERA superluminal neutrino non-result. Or look through time at the way questions about gravitational waves were changed by the LIGO detections.

If we come to a point where the scientific community has stopped coming up with new ideas to test, we will have bigger problems than the end of unique questions on Stack Exchange.

Even though I am a new contributor to SE, I have quite a long knowledge of on-line Q&A or discussion communities on the Internet. I think that the question hits an important point which goes beyond the pure analysis of data trends.

Thus, I can't help but consider the possibility that, at some point in a far future, almost every single question would have been already answered on Stack Exchange and then marked as duplicate.

I think that this sentence is based on a dangerous implicit assumption: that for each question there is the ultimate answer and nothing more can be said once the good answer has been provided.

My experience with physics and teaching physics, but also the analysis of part of the existing SE data, tell me something different. There are answers which could be considered as final, but there are also many answers which may be improved further. My strong impression is that the possibility of improving an existing answer, is somewhat hampered by the mechanism of flagging a question as duplicate. The main reason being that new questions are much more visible than the oldest and the whole mechanism of gaining reputation from the judgement of the original poster of the question may be broken for answers to very old questions.

In my opinion, this question returns on the same point: a static view of a Q&A site makes difficult to see the difference between Wikipedia and SE. It is only the dynamic possibility of further improvement of the existing answers based on the history of the previous ones, which can be an important long term added value of SE.

My 2 cents are that if people would wait, instead of hurrying up to mark as duplicate a question a few minutes after it has been asked, most of the concern about the future of SE would disappear.

The answer is, the number of duplicate questions are unlikely to reach 100%. Therefore, StackExchange is unlikely to completely halt it's Q&A activity.

Reaching 99% would cause a slowing of activity, but, as common questions are answered and marked as duplicates, non-duplicates will become increasingly advanced and complex. Also, questions which are already answered continue to be commented or alternately answered. So StackExchange will always have a purpose and have activity.

On another note, I have seen many questions marked as "duplicates" which are not truly duplicates yet are similar. A better question might be, "will the proliferation of marking questions as duplicates dissuade users from asking questions out of frustration?"

An interesting idea would be to publish or have a periodic magazine containing the most popular questions and most popular answers.

I think there ought to be a reasonable time limit (3 month?, as a first bid) after which a question may be putten again without incurring a "duplicate".

Not the answer you're looking for? Browse other questions tagged discussion scope questions duplicates .

12
Liberal definition of duplicate questions and the health of physics stack exchange.
18
Good list, bad list
7
Merging duplicates?
7
It is hard to improve suggested edits to tag wikis
8
What is the current policy about questions which are easily answered googling?
4
What can we do about imperfect transitivity in marking duplicates?
3
Is Physics Stack Exchange even as active as before?
21
Are two questions that only differ in the desired level of sophistication of the answer duplicates?
16
Should we test lowering the vote to close and reopen threshold?